Music has so much to teach us—when we listen well.

I design and frequently host concerts that engage and illuminate audiences while connecting them to the music of today, whether it be child composers for child listeners, or path-breaking new music compellingly selected and presented.

Whatever I present, I’m committed to audiences coming to love it as much as I do, and being changed in the process. 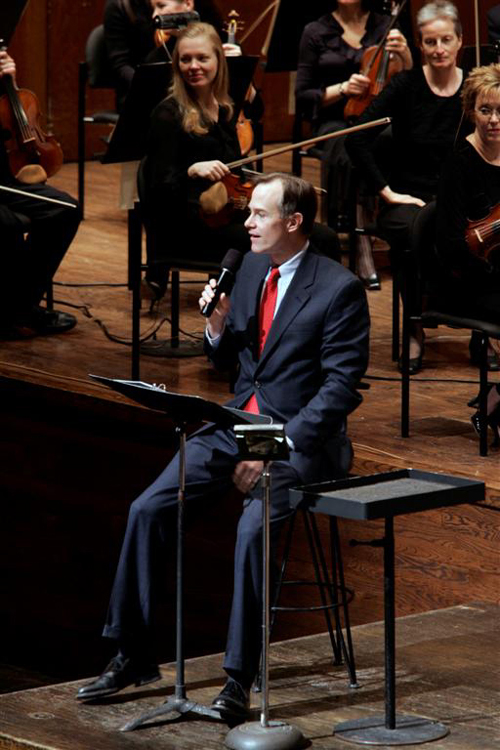 At the New York Philharmonic and in numerous prior positions, I create and oversee programs employing world-class musicians and teaching artists. I can provide an audit or advice on education programs for any kind of musical institution.

Learn More About Education at the NY Philharmonic »

The legendary New York Philharmonic series, begun in 1922 and made famous by Leonard Bernstein in live television broadcasts in the 1960s. I host today’s Young People’s Concerts, a series of four each season, exploring year-long themes like “Ages of Music,” “Capitals of Music,” or “Music With an Accent.” With playwright and director Tom Dulack, I develop concept, script, and visual imagery, and I host alongside outstanding young guests—actors, dancers, and musicians.

Learn More About Young People’s Concerts at the NY Philharmonic »

I design and host School Day Concerts around single large works that students and teachers can explore in depth and across disciplines, like Copland’s Billy the Kid or Rimsky-Korsakov’s Scheherazade. The incomparable Teaching Artist Faculty of the Philharmonic develop curriculum that prepares students, and the concert becomes a consummation of classroom learning where students’ creative input is celebrated. Everything is captured by cameras and shown simultaneously on a big screen over the orchestra.

Learn More About School Day Concerts at the NY Philharmonic »

My Last Duchess & The Clever Mistress

To produce my first opera, My Last Duchess, I joined with fellow composer Robert Sirota and composer/conductor/producer Victoria Bond to present a double bill of one-acts set in the Italian Renaissance. My tragedy and Bob’s comedy make a delicious pair that has played to sold-out houses and received outstanding reviews. The original production is available, as are the works individually.

Learn More About My Last Duchess & The Clever Mistress »

Music Off The Walls

From 2002 to 2007, I created and hosted 18 chamber concerts for the Brooklyn Philharmonic, performed at the Brooklyn Museum in response to current exhibitions. Photographs of homeless people representing stations of the cross inspired a concert of Haydn, Gavin Bryars, Moondog, and Kevin James . . . The opening of a gallery devoted to feminist art suggested an exploration of feminism in music, with Ellen Taaffe Zwilich, Janika Vandervelde, Chen Yi, Augusta Read Thomas, and Tania Leon . . . The permanent exhibition “American Identities” inspired a concert of Thomson, Ruggles, Jerome Kitzke, and Cristian Amigo.

Learn More about Music Off The Walls »

I, Too, Sing America

In 2001 and 2002, I programmed two concerts—each performed twice—that presented African-American poetry set to music by composers of all races. My own works A Georgia Song, on poetry of Maya Angelou, and American Journal, on poetry by Robert Hayden, were featured. We performed at Weill Hall at Carnegie Hall, Riverside Church, and Harlem School of the Arts.

Learn More about I, Too, Sing America »

A memorable 2001 concert of wordless sacred music, presented at the beautiful Church of the Ascension in Greenwich Village. Each work—music by John Luther Adams, John Tavener, James MacMillan, Janice Gitek, and the premiere of my own String Quartet No. 2: Intimations and Incarnations—was performed in a different part of the building.

Learn More about Beyond Words »

A highly theatrical 1999 concert combining visual art, lighting design, and percussion music at the Kitchen in Chelsea. Inspired by Pat Lipsky’s geometric abstractions, I composed my large-scale, three-movement Dark Love, which Talujon Percussion Quartet played around the monumental paintings themselves. Additional music by Ushio Torikai and Talujon themselves completed a spellbinding evening.