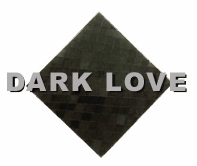 Dark Love is an interdisciplinary exploration of sound and image, a collaboration of composers, musicians, and visual artists, originally produced at The Kitchen in New York City in February, 1999. Dark Love creates a theater of music and art, a performance where the visual experience becomes a musical unfolding and the musical experience becomes an indelible visual image. It extends and challenges a centuries-old tradition of cross-fertilization between art and music. 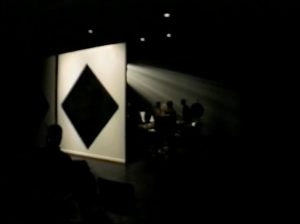 Click the image to view a trailer about Dark Love.

Dark Love was inspired by Pat Lipsky‘s monumental Black Paintings, created from 1993 to 1997—powerful abstractions, skewed grids filled with surprising shades of black. These eight-foot-tall, diamond-shaped paintings, with their variety of built-up surfaces, the deceptive curves of their ridge-lines, and the wide palette of color that emerges over time, evoke critical excitement wherever they are shown. As art critic Karen Wilkin describes Lipsky’s Black Paintings:

Shiny blacks turn into browns, glossy greys become greens, opaque browns become blues . . . Within the overall expanse, groups of squares reveal their affinities in an elusive counterpoint, momentarily breaking loose from the fabric as a whole, before subsiding into the over-all color harmony.”

Composer Theodore Wiprud responded to these profound and sensual paintings with a major new work for percussion ensemble, conceived for performance with the three largest Black Paintings on stage. Commissioned by The Commission Project and composed specifically for Talujon Percussion Quartet, this music explores the paintings both as overwhelming sensory experiences and as a three-part spiritual journey: “Dark Love,” “History,” and “In Memoriam C.G.”

Percussion in performance is sculpture in motion—a large assemblage of instruments, woods, metals, drums, with four players moving dramatically among them; mallets, sticks, hands, and bows in constant motion. Like the Black Paintings, percussion deals in color, rhythm, and form. Like music, the Black Paintings reveal their riches gradually as one views them from differing perspectives and through an extended encounter.

Talujon is an explosive quartet of young composer/performer/inventors, widely known among new-music aficionados and regularly reviewed in The New York Times by critics like Anthony Tommasini and Allan Kozinn. Their performances draw on ancient drumming traditions—African, Arabic, Asian, and Latin—as well as the Western avant-garde tradition of composers from John Cage to Steve Reich. In addition to playing Wiprud’s Dark Love, Talujon has created a work entitled Still She Shines, performed on large, playable sculptures of metal and water. Featuring a variety of found objects, Still She Shines mines the visual and musical beauty latent in everyday objects and unites visual and musical art in a single collaborative conception.

A third work completes the program: Ushio Torikai‘s C/FOUR, commissioned by Talujon and conceived for light design by Traci Klainer as a sound-and-light show. In this work, the visual element is dynamic, ephemeral, ever changing. It is conceived for performance on a set designed by Kevin Roach.

Learn More about Dark Love » Back to Concert Programming »